How many credibly accused sexual predators does the Supreme Court need before it can be considered appropriately “balanced?”

We already have Justice Clarence Thomas, famous for his angry yet unconvincing denial about using inappropriate sexual language against Anita Hill while she worked for him. Of course, Republicans continue to imagine that Professor Hill made up her accusations about Thomas, even though David Brock, the author of the attack-book, The Real Anita Hill, eventually admitted that he had lied in order to trash Ms. Hill’s reputation and to protect Clarence Thomas.

One example of Brock’s (and Thomas’s) brutal attacks against Hill is revealed in a New York Times article that describes the intimidation of a witness who had spoken in support of Hill: “Justice Thomas used an intermediary to provide Mr. Brock with damaging information about a woman who had come forward to provide support for Ms. Hill's accusations of harassment by Justice Thomas.”

With this material at his disposal, Brock “then used the information to force the woman to retract her statements about Justice Thomas.”

In other words, a woman who had been willing to offer support for Anita Hill’s accusations against Clarence Thomas was then, with the help of the Justice himself, intimidated into withdrawing her support. Brock also admitted to engineering attacks against Democrats and feminists who supported Hill.

All of this is reported in Brock’s later confessional book, Blinded by the Right: The Conscience of an Ex Conservative.

Given the vicious onslaught against Anita Hill that Brock spearheaded, and Clarence Thomas abetted, it’s no surprise that Professor Christine Blasey Ford was reluctant to come forward with her accusations against Brett Kavanaugh.

I believe that Blasey Ford is telling the truth when she says she was held down and groped by Kavanaugh as he held her mouth shut and tried to take her clothes off. This incident happened at a party in the early 1980s when she and Kavanaugh were both high school students.

Here’s why I find Blasey Ford convincing: She only revealed her concerns about Kavanaugh’s character to her senator, Diane Feinstein, last July before he was designated to be President Trump’s pick for the Court. Furthermore, she was clearly deeply traumatized by the experience, which she regards as attempted rape. She brought it up in at least two therapy sessions that she underwent about six years ago, which is to say, decades after the incident occurred. This assault changed her life very much for the worse. Notes from those therapy sessions confirm this point.

Finally, in accordance with her attorney’s advice, she took a lie detector test administered by a former FBI agent and passed.

How can she not be telling the truth?

Kavanaugh, she says, was stumbling drunk at the 1980s party and this point, along with the fact that he was then only 17, has led some people to argue that even if true, the incident shouldn’t be counted as significant since he was a mere adolescent. But I disagree. For one thing, if, when I was a high school student, I had found out that one of my classmates had done such a thing to a young woman, I would have considered him a nasty character and I would not pass it off with the thought that, after all, he’s just a teenager. In fact, one of my friends in college acted abusively toward a young woman at a drunken fraternity party when he was about 20. The points that redeemed my friend in my eyes were that he admitted to what he had done and, most importantly, he clearly felt terrible about it.

This is what’s most troubling about Brett Kavanaugh. He is unwilling to express remorse for this incident.

Of course, like Clarence Thomas, he denies everything. But…

It is worth adding that Blasey Ford says there was another young man in the room along with Brett Kavanaugh, Mark Judge. Mr. Judge, who today is a writer, strongly denies that the incident took place. However, Mr. Judge has written extensively about the drunken parties which he and fellow Georgetown Prep students engaged in during the 1980s. In his fictionalized account of this scene, he refers at one point to a fellow prep student named Bart O’Kavanaugh who pukes and passes out in someone’s car after leaving a party.

I sincerely hope we do not put another accused sexual predator on the Supreme Court. But if the Republicans do decide to go ahead with Kavanaugh’s appointment, shouldn’t they at least expect a little remorse from him? Shouldn’t he be expected, at a minimum, to express heartfelt sympathy for the woman who says he traumatized her with his sexual aggression? If, as he claims, he has no memory of this incident (possible, given the drunken atmosphere surrounding Georgetown Prep parties) shouldn’t he at the very least be empathetic and apologetic about Ms. Basely Ford’s suffering? Is that too much to ask that of a man who presents himself as worthy of sitting on the highest court in the land?

And, by the way, what is in those hundreds of documents from Kavanaugh’s past that the White House refuses to release? 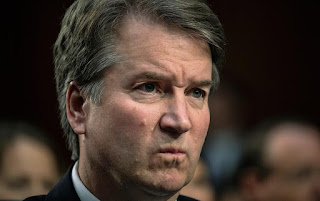 From The New Republic