When Worlds Collide: Hillary and the Anti-Cosmos

On October 9, The Daily Show featured an interview with Republican strategist Noelle Nikpour who argued that Obamacare is really unconstitutional except for the fact that the Supreme Court has declared it constitutional.

That Ms. Nikpour could regard the Affordable Care Act (i.e., Obamacare) constitutional and unconstitutional at the same time may seem irrational, but perhaps if we can understand this pattern of thinking – a pattern that seems to embody two parallel and incompatible universes - it may throw light not just Ms. Nikpour's mentality, but on the right wing of the GOP in general.

For example, conservative Republicans have described Obamacare as BOTH an unprecedented disaster that threatens to lead us into a Nazi-like slave society AND as something voters will like so much that they will never want to see it repealed.

But, in “the Anti-Cosmos,” the parallel universe where Ms. Nikpour spends much of her time, the Supreme Court needs to butt out of constitutionality issues.  And in the Anti-Cosmos, giving people access to affordable health care is equivalent to dragging them into hellish concentration camps.

A fascinating study by Democracy Corps, based on interviews with members of the Republican Party, helps explain why so many in that party seem to hold on to impossibly contradictory ideas.  The study reveals that Republicans, when asked what words they associate with Barack Obama, overwhelmingly replied, “Liar.”  The following were also prominently mentioned: Lies, Lie, Crook, Worst, Overrated, Liberal, and President.

Naturally, if Republicans automatically assume that President Obama is a lying, liberal, socialist crook, they need not pay any attention to what he says.   I’m guessing that other prominent Democrats, like Harry Reid and Nancy Pelosi, get no more of a hearing from these people than Obama does.

So, when the president says he’s concerned about millions of Americans lacking insurance and he therefore wants to help them with his Affordable Care Act, non-Republicans may say, “Great, let’s do it.”  But right-wing Republicans are more likely to disregard the president's rationale and say, “What is that lying crook up to now?  He probably wants to take away our guns and mind-control us with electronic implants.”  And nothing that Obama or any other Democrat can say will alter their thinking, because dark, distrustful ideas dominate the Anti-Cosmos where they spend much of their lives.

We should note that since 9-11 our government has set up a vast security system that is gathering oceans of data about us, much of it without our knowledge or approval, and this does not help Obama where issues of trust are concerned.  Of course, this surveillance is not merely an Obama undertaking, but for people who start from the premise that he’s a lying socialist bent on enslaving us, blaming him for it just feels right.

It turns out that many conservative Republicans distrust the American public education system almost as much as they distrust Democrats.  They also reject some of the findings of science.  As the report says, “Evangelicals and Tea Party Republicans [the two main conservative GOP factions -- editor's note] share and are consumed by skepticism about climate science—to the point where they mistrust scientists before they begin to speak.”

So, if scientists talk about evidence that human activities are causing global warming, right-wing Republicans can simply disregard this input.  The scientists, they believe, are part of the Obama conspiracy.

Who do the right-wing Republicans trust?  Fox News, for one.  Astonishingly, many of them do not regard Fox as conservative, but see it as a middle-of-the-road news source.  According to one respondent, it’s the only network “in the middle.”  Another claimed that it is about the only source that gives you both sides.  [Holy Shit!! – editor’s note]

The survey distinguishes between the motivations of the Evangelicals and the Tea Party conservatives.  The former believe that their world, which is white, traditional and Christian, is under assault and losing ground.  They do not accept gay marriage or abortion rights and don’t want to offer undocumented aliens a path to citizenship.

Tea Party Republicans, on the other hand, don’t care so much about abortion or gay marriage.  For them, Obama’s ultimate scheme is to make government so big that our freedom will be lost forever.  Oddly, though they see government as the Evil Enemy of Freedom, they regard the Constitution, the very document that breathes life into government, as Sacred and Good.  I think they must have a Real World understanding of the Constitution and an Anti-Cosmos attitude toward government.

One of the most interesting points to come out of the Democracy Corps study is that moderate Republicans, who make up about 25% of the GOP, feel isolated from their own party.  This is mainly because the Tea Party and Evangelicals make up more than 50% of the GOP and have been leading the party into a series of disasters including the recent government shutdown.

The moderates believe in small government but they are not uniformly hostile to Obamacare and they respect science even to the point where some of them have concerns about global warming.  They sometimes refer to the conservative wing of the party with such unflattering terms as close-minded, wacky, full of crap, and unelectable.

The moderates prefer politicians who work for compromise and many of them reject Fox News, seeing it as not really a news source at all.  According to one moderate respondent, “It tells about as much truth as like Jerry Springer does now.”  In sum, the moderate Republicans disagree with Democrats on a number of points, but they don’t seem to be taking any of their cues from an unreal Anti-Cosmos.  They are ready to disagree and compromise with Democrats where this will help solve Real World problems.

Hillary 2016?  How would the Anti-Cosmos deal with that? 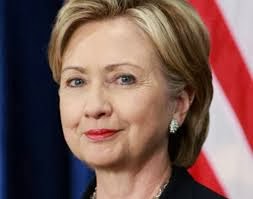 Arun Gandhi: Lessons from My Grandfather

Last week, Rollins enjoyed a visit from Mr. Arun Gandhi, the grandson of Mohandas Gandhi, the man who made non-violent resistance world famous.  I’ve often thought that Mohandas Gandhi would have been a good candidate for a “man of the century” award, but, when I googled this phrase, I discovered that Time Magazine had named Albert Einstein the Man of the Century in 1999.  Einstein is also a worthy choice, but I was pleased to see that Gandhi was listed by Time as a runner-up.

Arun Gandhi keeps up the work of his influential grandfather though, as he is quick to point out, he does not maintain the ascetic lifestyle of the Mahatma.  He spoke to the campus on Wednesday evening in the Knowles Chapel.  The crowd who came to hear him filled the chapel such that a video feed had to be set up in the Tiedtke Auditorium to accommodate the spillover audience.

He had a number of interesting stories about his grandfather as well as about his grandmother who, it turns out, was near to being saintly in her own right, given the demands of the Mahatma’s austere and single-minded life.

Gandhi used to sell his autograph for five dollars apiece as a way to raise money for his cause.  When he was about twelve, young Arun had made up his mind to get his grandfather’s autograph without paying the “fee.”  His struggle went on for months, and involved him interfering in his grandfather’s important meetings always with the hope that the Mahatma would give up and in exasperation offer a free autograph to his grandson just to end the nuisance.  It didn’t work.  And tellingly, Gandhi’s unyielding intransigence did not involve any sort of physical punishment or harsh verbal scolding.  The worst that happened to the boy was that when his grandfather was busy in a discussion with colleagues, if Arun showed up with his autograph book, the Mahatma would put his hand over the boy’s mouth and hold his head to his breast to keep him still.  But of free autographs, there were none, not even for beloved grandchildren.

At a later discussion, Mr. Gandhi recounted an incident when he talked Jawaharlal Nehru (who was destined to be India’s first prime minister) into making him an omelet by claiming that he ate eggs – something Mahatma Gandhi did not do.  When his grandfather found out, he questioned the boy’s parents about eating eggs.  “No,” they said, “we do not eat eggs in our household.”  So later when Gandhi was together with his son and grandson he asked, “Now which one of you is telling the truth? Arun, you told Mr. Nehru that you eat eggs, but your father says no eggs are eaten in your household.”

“Well,” replied Arun, “we eat cakes in our house, and I don’t believe you can make cakes without eggs.”  At this the Mahatma laughed and said, “Yes, you will make a fine lawyer someday.”

I had the honor of driving Mr. Gandhi to the airport at the conclusion of his visit.  On the way there he talked about Gandhi’s idea that people should not have enemies.  “As soon as you see someone as an enemy,” said Arun, “you dehumanize them.”

I was also interested to hear him talk about the rivalry between north Indians and south Indians that even finds expression in communities here in the United States.  North Indians prefer statues of deities made of white marble, while south Indians prefer black marble.  In fact, there is no religious reason to prefer one over the other, but sometimes communities break apart over this issue and set up separate Hindu temples just because they’re being “cussed.”

I loved hearing Mr. Gandhi use the word “cussed,” which I don’t believe I’ve known anyone to utter since about 1958.

When I asked him about Richard Attenborough’s film Gandhi, he said that he thought it did a very good job of portraying his grandfather’s philosophy and personality.  Some people criticized the film, he said, because it didn’t give adequate credit to Mr. Nehru and other leaders who worked alongside Mahatma Gandhi for the independence of India.  But, after all, he added, it was a film about Gandhi, so this kind of distortion is to be expected.

When I asked if he and his grandfather appreciated satire, Arun said, yes, if it was appropriately aimed and not too bitter.  His grandfather, he insisted, had a terrific sense of humor.

When I finally said good-bye to him at the airport, I encouraged him to come back and spend more time at Rollins, and I was glad to see that his response suggested that he just might.

The following morning, I bragged a little to my class about having had the honor of taking Mr. Gandhi to the airport.  They were duly impressed.  Then I told them that we got into an argument over my driving that resulted in fisticuffs, at which they laughed.  They knew I was joking; not even I could be that cussed. 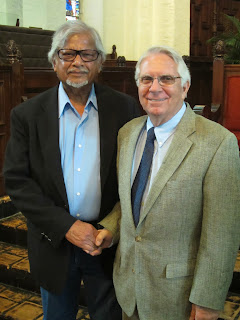 With Mr. Arun Gandhi at the Knowles Chapel