A dangerous dead end. That’s the best way to describe the point to which our incompetent president has dragged us in our dealings with North Korea. Trump seems to believe that childish name-calling will bring about some kind of useful result in our relationship with this small but dangerous nation. Granted, Kim Jong-un has also engaged in name calling, but, let’s face it, it was Trump who first made the war of words personal.


The fact that Kim Jong-un is a self-absorbed, lying egomaniac does not excuse the self-absorbed lying of Trump. Both of these psychologically questionable leaders routinely conjure up ridiculous claims about themselves. Kim Jong-un, for example, claims that the first time he played a round of 18 holes of golf, he made 11 holes in one and ended with a score of 34. This empty boast is even more preposterous than Trump’s phony, self-published Time Magazine covers honoring himself that he has plastered all over his properties. At least Trump doesn’t claim (as Kim does) to be descended from a line of heavenly ordained ancestors, born on the slopes of a sacred mountain. At least not yet.


Our immediate problem is that we (and by we, I mean Americans and Koreans) are at the mercy of two dishonest egomaniacs, each of whom believes the best way to get what they want is by “being tough.” And each seems to define “tough” as spewing out crudely belligerent insults supplemented by threats to use sophisticated weaponry, including nuclear weaponry.


The only way to make this situation less dangerous is for each side to drop the public threats and insults and have their representatives sit down to talk about the best way to avoid war. War, after all, would be horrific for all sides, and quite problematic for Japan and China as well. In fact, the best kind of conference for discussing an end to current tensions would be one that included all affected parties: North Korea, South Korea, the U.S., Japan, and China.


It may, at this point, be impossible to completely block North Korea’s nuclear program. Kim believes that having nukes is the best way to preserve his administration. He sees Saddam Hussein and Muammar Qaddafi as having been destroyed by the U.S. or with American help, mainly because they lacked such weapons. This is a driving force behind his determination to get such weapons. Another factor is national pride which, in North Korea, is closely tied to its nuclear program.


The U.S. has no compelling reason for overthrowing a non-nuclear North Korean government. And, as of now, there seems no way to prevent North Korea from getting a nuclear missile without our launching a military attack. Such an attack, even without nukes, would likely result in a horrendously bloody war on the peninsula. North Korea’s military holds the city of Seoul, South Korea, hostage by virtue of having thousands of missiles and artillery pieces within range of it.


But the worst nightmare for the U.S. would be a North Korea with hundreds of long-range nuclear missiles capable of hitting us. In such a scenario, North Korea could do almost as much damage to us as we could to it.


Perhaps the best deal that can be reached at this point is one which allows North Korea a verifiably small nuclear arsenal – one or two missiles – which it could see as both a deterrent to an American attack and a glorious victory in its long struggle to become a nuclear nation. Such a scenario would still make North Korea vulnerable to annihilation by America’s huge nuclear arsenal, but would, of course, render us vulnerable as well, though without our having to face the existential threat of hundreds of enemy missiles in the hands of a belligerent egomaniac.

I keep thinking of the opening lines of a famous graduation speech given by Woody Allen. A version of this speech pertinent to our current situation would go something like this: "Two paths lie before us. Down one lies trouble, anxiety, and endless difficulty. Down the other lies total annihilation..."

Right now, we are faced with two such paths. One is a continuation of threats, saber-rattling, and name calling, which is likely to spark a military showdown and possibly disastrous war. The other would be a conference in which all interested parties sit down and work their way toward a stable, peaceful relationship acceptable to all sides. If such a relationship could be established, especially if it included increased communications between the governments and citizens of both sides, it would very likely evolve eventually into the sort of semi-cooperative rivalry that we currently have with China and Russia. That would allow us to push the second hand on the Doomsday Clock back by a few precious ticks.


Unfortunately, our president as of now seems to think the name-calling and threats are the way to go. Let us hope his advisors can coax him onto a path of intelligent reason before he leads all over a Strangelovian cliff. 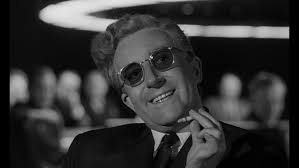