Whose Children Should Get to See a Doctor?

I thought Kamala Harris did a nice job of rolling out her presidential campaign last weekend. She put a good deal of emphasis on dignity and truthfulness and by doing so reminded everyone just how awful the man currently occupying the White House is.

Senator Harris also said she wants to make Medicare accessible to all Americans. This caused an outburst of indignation from a couple of billionaires, including Howard Schultz and Michael Bloomberg who immediately opined that we just can’t afford this.

So, I have a couple of questions about those touting the “we can’t afford it” claim. First, if countries like the UK, Canada, Switzerland and dozens of others can afford it, why can’t we?

Second, if medical costs per person are lower in these countries than they are here, even though their health care is equal in quality to ours, why is that? Isn’t that a consequence of the profit-taking of insurance companies?

Third, if we can give away a trillion dollars in tax cuts for the wealthy, how is it we can’t afford health care for people who have trouble paying for it?

And finally, would Howard Schultz be inclined to look at his children or grandchildren when they were in need of medical attention and say, “Sorry, we can’t afford it”? I’m guessing he wouldn’t say this, which leads me to ask why he thinks people who are not billionaires should have to deny health care to their children?

There is a line in an old folk song that says, “If livin’ were a thing that money could buy, the rich would live and the poor would die.” Apparently Mr. Schultz and Mr. Bloomberg believe that their family members should not die for want of health care, but other people’s children and loved ones should.

I believe that high quality health care should be available to every family no matter how poor. President Obama made some progress in pushing us toward that goal, but a lot remains to be done. As we work toward that goal under the leadership of people like Senator Harris, we can expect to hear objections from the likes of Howard Schultz, Michael Bloomberg and the good people at Fox News, but so far, I haven’t heard any of them offer answers to the questions I listed above.

Now, let’s see if Senator Harris keeps up the impressive messaging that she has demonstrated in the first phase of her campaign. And no, I don’t believe she or any other capable Democrat will be undermined by a Howard Schultz candidacy because – Donald Trump. The selfish, sleazy, and pathetic qualities that have characterized Trump all his life are becoming more and more evident every day. He is going down. 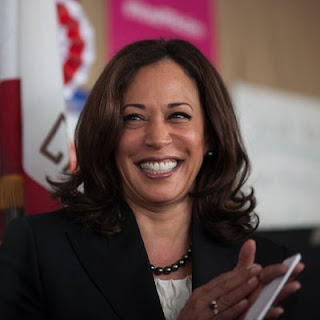 What Makes a President Unfit for the Office?

Last Monday, Senator Elizabeth Warren declared her candidacy for the presidency, and Donald Trump responded in a characteristically crude and vulgar manner. During a Fox interview he was asked about running against her and he responded, “We’ll see how she does. I wish her well, I hope she does well, I’d love to run against her.” Then, when asked if he thought she could beat him, Trump answered, “Well, that I don’t know. You’d have to ask her psychiatrist.”


I wonder if Senator Warren might want to launch her candidacy by saying something like this: “Won’t it be nice when the White House is no longer occupied by a childish vulgarian?”


It’s clear that the presidency hasn’t changed Trump. He’s still childish and still as vulgar as ever. He entered the Oval Office by indulging in infantile name-calling and schoolyard taunts, and now, two years later, he still prefers infantile blather to intelligent debate.


Some people would say his crude and vulgar ways make him unfit for the presidency, and I would agree with these people. But I would not agree that his adolescent mindset is his greatest flaw. (And, by the way, I don’t mean to insult adolescents in general here, so apologies to those of them who do not habitually sink to the level of Donald Trump in their discourse.)

So, what is Trump’s greatest flaw? For me it’s his contempt for democracy.

And, truth be told, identifying Trump’s greatest flaw, the one that, above all, makes him unfit to be president, is not that easy. There is so much to consider. You have his crookedness, his pathological lying, his preposterous, self-aggrandizing narcissism, his profound ignorance of American history and government, and his grotesque and disgusting bigotry and misogyny. Any one of these make him unqualified to be president; but the one that gives me the greatest pause is the way he seems to have no interest in promoting or defending democracy.

The essence of democracy is justice; ideally, a democratic society relies on its institutions to determine who deserves what and makes it possible for every voice to be heard as rewards and punishments are meted out. Of course, we are not and have never been a perfectly democratic society. You could even say that since the 1980s we have grown gradually less democratic as conservative and libertarian politicians have handed over more and more power to the wealthy. But we are still largely democratic, and, unlike Donald Trump, I believe it is worthwhile to carry on the struggle to be more so.

Trump wants people to be rewarded not in return for what they have to offer society, but on the basis of how much they support or suck up to him. If you are on his side, you are the best. If you criticize him, you are failing, talentless, fake, crooked, clueless or burdened with some other terrible trait that he will try to capture in a puerile nickname.

One of his favorite targets is the free press. Most Americans believe in the importance of an independent press. But Trump calls media sources that don’t suck up to him (as Fox News routinely does) fake and, in some cases, he speculates about possibly using the law to silence media critics. Recently he tweeted that Saturday Night Live was a “Democrat spin machine” and said its satirical comedy should be tested in court, suggesting it “can’t be legal.” And, as is well known, he routinely denigrates The Washington Post and other non-suck-up news sources, even going so far as to try to kick CNN reporter Jim Acosta permanently out of the White House. And he infamously referred to the media as the enemy of the people.

It isn’t just the independent media Trump despises. Whenever a court decision goes against him, he is likely to attack the courts or the specific judge making the unwelcome decision. And his newly appointed Acting Attorney General has pointedly argued that the Judicial Branch of our federal government is inferior to the Executive and Legislative Branches.

No, that is not what the Constitution says.

One of Trump’s most disturbing undemocratic tendencies is his habit of insulting and otherwise alienating our most crucial allies. He seems to have no awareness of just how vital the alliance of democracies has been in stabilizing the international order and promoting peace and the prosperity that comes with free trade.

Worst of all is his admiration for international thugs and tyrants like Kim Jong Un (“He wrote beautiful letters and we fell in love” says Trump), Saudi Arabia’s Mohammad Bin Salman (the man behind the murder of Washington Post reporter Jamal Khashoggi), and, of course, Vladimir Putin.

What is behind Trump’s endless series of compliments for Vladimir Putin, the thuggish Russian dictator who routinely murders his critics and whose heavy-handed interference in our 2016 and 2018 elections has been proven by our intelligence agencies? Trump’s response to Putin's attack on American democracy has been to flatter and kowtow to the Russian tyrant. For starters, he makes it a point to call Putin and congratulate him on his electoral victory last year (a victory that was leveraged by Putin’s control of the Russian press and his assassination of rivals). On top of this, Trump regularly dismisses what our own CIA and other intelligence agencies have established about Russia’s malevolent interference in our elections and accepts Putin’s word when this world-class scoundrel and liar (I mean Putin here, not Trump) claims to be innocent: “I believe that President Putin really feels, and he feels strongly, that he did not meddle in our election,” says Trump.

Good God. I do not believe we have ever had a president more contemptuous of democracy or of the American institutions that make our democracy possible than Donald Trump. And I’m old enough to remember the villainy of the Nixon White House.

So, feel free to make your own argument about what is the one quality that makes Trump most unfit to be president. Yes, there is his childish crudeness, his bigotry, his misogyny, his pathological lying, his narcissism, his ignorance and his all-around corruption, but for my money, his most damning failure is his failure to respect and defend democracy.