Kathryn Bigelow, the director of Zero Dark Thirty, wrote the following: “I think Osama bin Laden was found due to ingenious detective work. Torture was, however, as we all know, employed in the early years of the hunt. That doesn't mean it was the key to finding Bin Laden. It means it is a part of the story we couldn't ignore.”

Bigelow is no fan of torture and, in fact, as her Los Angeles Times essay makes clear, she is fundamentally opposed to it.  But did her film inadvertently help promote it?  Popular movies do have their effects on the public imagination.  Witness the way in which Gone with the Wind promoted a heart-warming view of plantation slavery and Juno made teen pregnancy seem cool.

Steve Croll, in a terrific piece on Zero Dark Thirty in the New York Review of Books points out that Americans have grown more comfortable with torture in recent years.  Stanford scholar Amy Zegart attributes this change in attitudes, in part, “to the influence of ‘spy-themed entertainment.’”

Zegart is referring to shows like the TV series 24 in which torture is portrayed as vitally important in saving America from catastrophic terrorist attacks.  But torture is not crucial to our well-being, and shame on the 24 writers for making it seem so.

Croll goes on to argue that Zero Dark Thirty is problematic because it may influence the public debate about torture by virtue of its “distorted contribution.”

I think Croll is correct.  Though I have to admire Zero Dark Thirty as a work of dramatic art, I believe it will all too likely help fix the idea in American public opinion that torture was useful and justified in the hunt for Bin Laden, when its usefulness is clearly debatable and its justification even more so.

Let’s just say that we have faced more dangerous forces in our past than anything presented by today’s Al Qaeda-type religious fanatics.  Abraham Lincoln dealt with the greatest threat our nation has ever encountered and yet he did not feel it necessary to torture Confederates in order to preserve the union and end slavery.  Nor did Eisenhower tell his underlings to torture captured German soldiers in order to defeat Hitler.  If these threats to our nation were met without sanctioned torture, why should it be so damn essential to us in our fight against nutcase losers like Osama bin Laden?

Some people (former Vice President Dick Cheney, for example) claim that torture is as American as Honey Boo Boo and just as lovable.  Of course, the kinds of beatings, waterboardings, confinement to coffin-like boxes, being stripped naked and hung from the ceiling by one’s wrists for hours at a time portrayed in Ms. Bigelow’s film are not, Mr. Cheney insists, torture.  They are, to use CIA parlance, merely “enhanced interrogation techniques.”

I wonder if Mr. Cheney ever pictures himself or his loved ones being interrogated in such an enhanced manner.  My guess is no, the only ones he imagines will ever be subject to such techniques are people who he thinks deserve it: terrorist suspects, Iranians, Palestinians and Democrats.

There are, we should note, prominent officials in the U. S. government who are vehemently opposed to torture and they have made their objections known to Cheney and company.  Most notable of these are Senators John McCain (himself a victim of torture) and Dianne Feinstein.

The Geneva Conventions prohibit combatants (or anyone else) from inflicting “outrages upon personal dignity, in particular humiliating and degrading treatment.”  So I have a question for Mr. Cheney and others of the Bush administration who seem so enthusiastic about using their “enhanced interrogation techniques.”  When you all advocate waterboarding captives, the placing of them in narrow boxes for extended periods, etc., do you tell yourselves that you are not doing anything that could be considered “humiliating and degrading?” I am sorry to be the one to tell you this, but you need to face facts: to normal Americans your very existence is both humiliating and degrading.

OK, I’m not really sorry to be the one to tell you that. 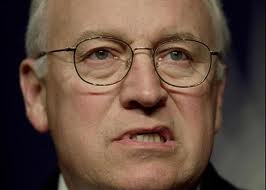 Even if torture does work, decent people should oppose it and so should Dick Cheney.  And, though I congratulate Ms. Bigelow for having made a compelling film, I object to her film’s implication about the usefulness of torture and am concerned that it will strengthen the hand of those who want it to become a permanent part of “the American way.”

On Not Taking Humor Lightly

In view of my longstanding interest in humor, I was intrigued to see that today’s NY Times referenced “the first-ever United States symposium on the artificial intelligence of humor” organized by computer scientist Julia M. Taylor et al.  Well, I say it’s about damn time.  Humor, after all, is no mere laughing matter.

I want to acknowledge up front that not everyone shares the same sense of humor.  For example, at a conference last fall, I managed to crack up the group at my table with this bit of hilarity: A colleague named Murray was complaining at some length about spending time at a hotel where a Chinese family, the Wongs, were having a major event.  “Well,” said the exasperated Murray, “wherever we went, we were told, ‘The Wongs have reserved this room -- these hors d’oeuvres are for the Wongs -- the Wongs will be using this area, etc.’”  To which I responded, “Jeez, Murray, you were at the Wong place at the Wong time.” At this, the entire table burst into laughter.

But, when I related this hilarious incident to a spouse and daughter (who shall remain nameless), the former responded with a combination head-shake and eye-roll, and the latter by saying flatly, “Were these Dads at your table?  That sounds like a Dad joke.”

Rodney Dangerfield, now I understand you.

Anyway, my research into the functions and bases of humor recently included the reading of a fascinating book by Hurley, Dennett and Adams called Inside Jokes: Using Humor to Reverse-Engineer the Mind.  But this book, interesting and thought-provoking though it is, does not quite hit the nail on the head in my opinion.  One point I did get from it is that the actors involved in humor always include humans or anthropomorphized entities.  I had never thought of this before, but I am convinced that it is not only true, but very significant.  It emphasizes that humor is above all a social construct with a social kick.

These authors review some of the major theories of humor including the release of tension theory, the incongruity theory, and the superiority theory.  Of the factors these theories highlight, the most crucial, I believe, are incongruity and superiority.  Other points, like the release of tension, may sometimes be relevant, but, it seems to me, that virtually every humorous situation includes either something incongruous or an occasion to feel in some way superior to a victimized individual.

My favorite joke from the entire book can illustrate this.  Here’s a version of it:

Eight-year-old Johnny and six-year-old Jimmy were about to go downstairs for breakfast when Johnny says to his little brother, “Say Jimmy, I think it’s about time we started cussing.  So at the table this morning, I’ll say hell and you say ass, OK?”

So, when they sat down at the table, their mother asked, “What will you guys have for breakfast?”

“Sure as hell, Mom, I’ll have some Cheerios!” says Johnny.

At this, his mother grabbed him by the scruff of the neck, threw him over her knee and walloped him five or six times.  Then, dragging him upstairs, she threw him into his bedroom and slammed the door.  Finally, she stomped downstairs, sat back down at the table and said, “So, what will you have, Jimmy?”

OK, so here we have it.  There are incongruities between Jimmy’s innocence and his rough language, between his focus on the issue of Cheerios rather than cussing as the source of Mom's anger, and, finally, between the expectation of self-preserving compliance vs. blatant defiance in his response.  We also have the victimization of poor little Johnny and, perhaps, of Jimmy as well.

The authors of Inside Jokes emphasize the incongruity feature of humor at the expense of the victimization or “superiority theory.”  And, though I agree that incongruity may be the single most important factor in humor, I’m not willing to discount the superiority aspect as these authors do.  I can’t imagine how people find America’s Funniest Home Videos amusing without acknowledging the importance of superiority/victimization.  I mean, we all see the idiot attempting to jump his bicycle over the muddy ditch, we know what’s coming, yet all too often we laugh at his disastrous splat when it comes anyway.  And how do groin shots manage to evoke laughter year after year?  I’m expecting that an archaeologist will someday find a cave painting depicting a Megaloceros butting a Neanderthal in the groin while a gang of Cro-Magnons stand around laughing.

My main problem with the theory of Hurley et al. is that it gives too much weight to the cognitive payoff of having an incongruity resolved as the main driving force behind humor -- and even as the main explanation for the very existence of humor.  With apologies for oversimplifying their position, I suggest that they make a mistake by not recognizing the importance of humor’s social function.

If we are going to explain the universal existence of humor in human societies, it seems to me the best way to do so is by noticing the way in which humor functions to define social relationships, either by cementing them, as when individuals share a laugh, or by specifying or denigrating outsiders as in the case of satire and mocking humor.  A theory encompassing these functions has room to accommodate both the importance of incongruity (as when two people share a perspective on an issue, sometimes by resolving an incongruity that reveals a heretofore unspoken truth) and superiority, when the butt of a joke takes it on the chin or some other anatomical area.

Related to humor is another human phenomenon, slang, which not only often incorporates humor, but which, like humor, is very often employed either to strengthen a social bond or to distinguish in-group members from outsiders.

I have to stop here, given time's winged chariot, etc., but allow me to offer a couple of pictures for your consideration as I go: 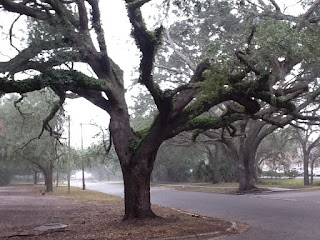 This tree is not at all funny, but I took a picture of it during my morning walk because I  thought it looked very cool. 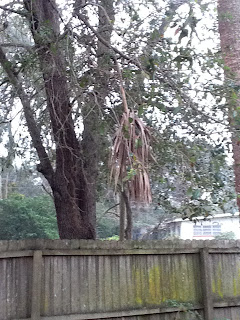 This tree, however, is hilarious - it has a palm frond stuck in its branches.  Ha, ha, ha!  What a stupid tree!