According to the betting markets, Hillary Clinton is favored to be our next president. But is this good news?


Yes and no. Yes, for obvious reasons. The second and third favored candidates in these markets are Donald Trump and Ted Cruz, both incredible assholes. Either one of them would certainly inflict lasting damage on the country, if not the world. I believe a Trump or Cruz presidency would be an even worse disaster than W’s presidency was, and apparently the American public agrees with me, which is why their chances of becoming president trail far behind Hillary’s.


But the bad news in the Hillary story is that she does not measure up to Bernie Sanders in some important ways. Bernie is focused on the influence of money in politics, a very serious and deep-rooted problem. Hillary may regard the influence of money as a problem (most Democrats do), but she also benefits from well-heeled interests and is not fighting this aspect of corruption the way Bernie is.


On the other hand, Hillary does have her strong points. She is moderately liberal on most issues and this makes her far superior to the GOP candidates. But what about character? No problem. As far as I’m concerned, her character is fine.


Well if you will just shut up for a minute, I will explain what I mean.


Hillary Clinton is a politician whose extraordinary ambition has led her to engage in some questionable actions in her long career. In other words, she’s a typical middle-of-the-road politician with her eyes on the White House. When I say typical, I mean she is not extraordinarily ignorant, as Donald Trump, George W. Bush, and Ronald Reagan are or were, and she is not extraordinarily sleazy as Donald Trump, Ted Cruz, and Richard Nixon are or were. She’s more like Barack Obama, Gerald Ford, and Dwight Eisenhower – hugely ambitious, willing to pull a fast one now and then, but not much different in her sense of moral decency than most people. (Many would consider this description in itself a kind of damning criticism, but then, these people have never tried to be president, so what do they know?)


But, let’s give Bernie his due here: he is, as Bill Maher recently said, “the most authentic guy to ever run for office.” And this is big. So is the fact that he has attracted a massive following. But again, I’m looking at the polls and the betting markets, and they say Hillary is very likely to get the nomination and to win the presidency. And, despite Bernie’s revolution, the truth is that Hillary has pulled in quite a few more votes in the primaries than he has.


Now back to the issue of Hillary’s character: something about this has long puzzled me. I don’t understand why so many people -- even some Democrats and independents -- consider her to be unusually untrustworthy. I’ve followed her career since Bill Clinton was elected president, and nothing she has done strikes me as notably dishonest. So, to figure out why so many people criticize her character, I recently sent out emails to people I know who are either Republicans or Bernie Sanders supporters asking them for specific details on the wrongdoings of Hillary Clinton. I emphasized in my request that I wanted specific details revealing dishonest actions that benefited Hillary and not just buzzwords like “Benghazi” or “emails,” etc.


Here are some of the responses I got:


1.     From a moderate Republican (or Republican leaning independent, I’m not sure):

I think Hillary is a smart woman, but there have been too many negative circumstances that she has been involved with and I know a lot of it is from Republicans. The problem with me is that I find it hard to believe that some of it isn't truthful. The one that bothered more than the rest was travelgate. I don't even remember all the details, but I know she fired most of the staff because they wouldn't do what she wanted I believe it wasn't all above board. Also, I don't think she should have stayed married to Bill after he got caught getting blow jobs from Monica along with all the shenanigans with his other girlfriends.


No real details here, but I think Bill’s “shenanigans” with his girlfriends is an important part of the story, as I will explain below.

2.     From a strongly conservative Republican:

8 years of Obama have been more than enough for us plus the Supreme Court is now getting full of Liberals and Hillary is going to continue this for too many more years, so I will vote for anyone that opposes Hillary…There are dozens of specific issues that I will not even attempt to put in writing here but …you can get similar info online or by listening to people like…Bill O’Reilly, Sean Hannity, Mike Huckabee just to name a few.

I don't like Clinton because she's a woman. Well, at least that's what the pundits and supporters keep telling me. Actually, despite the circus that is this presidential primary, the real reason I don't support Clinton is because of her ... wait for it ... stances on political issues!


…I obviously don't agree with her on economic issues, but the thing that really bothers me is her hawkish foreign policy. Aside from voting for the Iraq war, she's also supported stronger action in Syria, including arming rebels and airstrikes against Assad, the whole Libya intervention, and support for lethal drone strikes even against US citizens…

4.     The most telling critiques came not from Republicans, but from Bernie supporters. Ricky, a star student of mine, offered this:


…I think Hillary is a particularly avid flip-flopper. In fact, I think that she "evolves" on views so frequently, that the general public (that is to say the people not necessarily too well-versed in politics) has begun to take notice. Whether it be her stance on gay marriage, guns, trade deals, or most recently healthcare, she consistently, in my mind, insults the American voter by assuming that they will not notice her inconsistency…


Secondly, many people do [not] trust Hillary because of the establishment and corporate worlds rigging the system to favor Hillary…


I think a lot of people have seen what a dishonest campaigner Hillary is. Whether it be claiming that Bernie should take responsibly for Sandy Hook, claiming that Bernie wants to dismantle The Affordable Care Act, or trying to paint an inaccurate picture that Bernie is totally against President Obama is truly infuriating.


I have to agree that Hillary has changed positions, sometimes, I suspect, for no other reason than to make herself more electable. I’m not sure she has done this more than most politicians, but she has certainly done it more than Bernie Sanders has.


5.     Another Bernie supporter wrote this:
Nothing out of the norm for a typical candidate for presidency.  She's as corrupt as the rest, it is in my personal belief you can't even make it that far without being connected in some way to handshakes behind closed doors…


As for the facts: All I can stand behind is that she received classified information to her personal email.  From an outsider looking in my first reaction is big woop.  My second is, well if there is proper protocols and she didn't follow them then she should receive the proper investigatory/disciplinary actions…


What benefited her: I can only deduce that from experience it is a pain in the ass to log into government email. The real benefit is to not have to deal with the complications of logging into those VPN portals with the BS 16 character password you have to change every 3 months.

I know this is pretty standard for politicians, but I don’t trust her for the way she flip flops on issues. A lot of these are really important, such as LGBT rights, and she acts like she’s always supported LGBT rights. But it’s like, Bitch, there’s plenty of video and audio evidence to the contrary.


Also the Arizona primary (or caucus?) stunk to high heaven, and the fact that lower income housing areas weren’t provided voting areas seems extremely dubious towards Hillary. That’s the only win she’s had of the last 8 states, and it looks to me like she cheated.

She is also obviously funded by SuperPacs but denies up and down that she is. Bernie is funded by the people, and it feels like she wants to imply that so is she.

Her unethical actions, that I’m referencing, have all been about attempting to uphold a certain public image. Like I said earlier, a lot of the stuff I’m referencing is standard for a politician, but Bernie is consistently doing the right thing, voting the right way, and defending the lower and middle class, instead of just saying he’s defending those people. I know it’s a cliché at this point, but Hillary isn’t going to fight the billionaires that are writing checks for her.

Sorry if I ended up being more Pro-Bernie than what you were asking for, but my main distaste towards Hillary is that she’s not Bernie


I believe part of Hillary’s problem with the “untrustworthy” image is that the contrast with Bernie’s unusual candor and consistency makes her look bad. But another factor is, as commenter number 1 pointed out, Bill Clinton’s behavior. Bill had an authentic scandal surrounding his fooling around with Monica Lewinsky and lying about it. The Republicans pounced on him and actually succeeded in impeaching him. I believe a big part of Hillary’s problem is that she is, to an extent, tarred with the brush that Bill Clinton brought on himself with his cheesy behavior.


The other part is the constant refrain of the Republicans who, in the 1990s, were so hostile to the Clintons that they decided that anything they could do to destroy them was fair game. One consequence of this was the so-called Arkansas Project, generously funded by Richard Mellon Scaife, whose sole purpose was to find material that could be used to smear President Clinton. When efforts to find wrongdoing by Scaife and others failed, as they generally did (note the failed efforts to find criminality in Vincent Foster’s death, the Whitewater project, Travelgate, and Troopergate, for example), the GOP fell back on Bill Clinton’s messing around with women. The fact that they succeeded in impeaching him for the Lewinsky affair put just enough glue on the Clinton name that, combined with endless Republican repetitions of essentially false or lame accusations (the Clinton Foundation! Emails! Benghazi!) the GOP has managed to make Hillary vulnerable to charges of underhandedness.


Of course, we could also blame Bernie for being such a decent guy and thereby providing an unflattering contrast with Hillary as well, but I will refrain from doing so.


In the end, if Hillary winds up being the Democratic candidate, I will happily vote for her, not only because I think she would make a good president, but because I would so enjoy sticking it to all the GOP spinmeisters and sleaze peddlers who have labored so long and hard to unfairly smear her. Their dirty work has had an effect, but not enough, it seems, to prevent her from being “the most likely to succeed.” 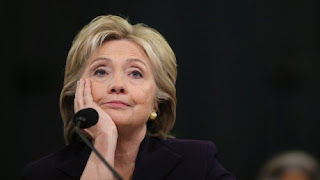