On a scale of 1 to 10, how funny would you say the following cartoon is? 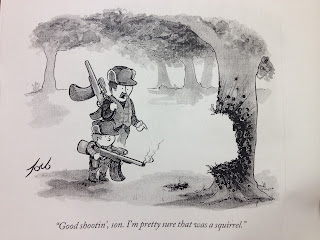 "Good shootin', son. I'm pretty sure that was a squirrel."
(By Tom Toro in The New Yorker)

I'm giving it a 9.5 at least, because I find it hilarious.

Of course, you may not find it funny at all, in which case you are probably a fascist.

What?  An explanation is called for?

OK, what gives this cartoon its ultimate bite is the social comment it makes about Americans of a certain mentality.  These Americans, sometimes described as “gun nuts,” hold one or both of the following opinions:

(b)   wielding such weapons is a good idea.

These are views with which I adamantly disagree, and, when I am in a cheerful mood, I often refer to people whose views clash with mine as fascists.

But Where Does Funny Come from, and Why Does It Sometimes Die at Cultural Boundaries?

When I showed this cartoon to a Chinese friend, she didn’t get it, even though she is a bright young woman who speaks English well and who has lived here for two years.  What gives?

It has often been said that humor is one of the most difficult things to translate across cultures, and, though this may be true, I haven’t heard any good explanations as to why this should be.

In the case of this cartoon, I believe, the humor depends on an understanding of America’s ongoing gun-law debate, and is further augmented by a degree of frustration with the reasoning that is often offered in support of gun ownership. This “reasoning” boils down to a sentiment that says, “I love - yes, LOVE - my implements of death, and if you can’t sympathize with my devotion, you just better shut up.”

It is in this emotional hothouse that points (a) and (b) cited above grow roots.

Obviously, someone from China might have difficulty picking up on the humor of Tom Toro’s clever cartoon, depending as it does on a viewpoint embedded in contemporary cultural ideals.

Three factors are said to underlie humor: incongruity, superiority and release of tension.*  Different authors emphasize one or the other of these, but I believe each can contribute to funniness.

In the Toro cartoon, incongruity rules.  We see it in the horrendous destruction rendered by the boy’s shootin’ and in the very idea of hunting with an assault weapon, especially hunting a small creature like a squirrel.  But adding greatly to the hilarity is the incongruity between the madness of assault-weapon hunting and the calm demeanor of the Dad – a man who talks as though he were quietly commending his son on his fly-fishing or hoop skills.  A man who talks, in other words, as though he and his son weren’t doing something insanely violent.

But there’s more, and this is where the “release of tension” theory comes into play.  For me, the very idea that assault weapons should be readily available to whoever wants them is so destructive and so irrational, that hearing this position argued as though it were reasonable is frustrating.  And yet we do hear this argument being made on a daily basis.  Having the lunacy of this idea so beautifully skewered is, for me, downright therapeutic.  Laughing at the incongruity here is one thing, but thinking about the crazy people who might say “there is no incongruity here,” adds to the hilarity.

So how would someone from a less gun-crazy country like China understand this?  They probably would not, unless they were keeping a close eye on America’s gun debate, and unless they too felt stymied by the bizarre ideas that are offered by the gun lobby as normal.

OK, next time, maybe I’ll find a Chinese cartoon and try to see why Americans might not get it.