In his December 8, 1986 journal entry, author Leo Lerman had this to say about Ronald Reagan:  “This man was shallow, a second-rate actor, utterly dependent on superficial Irish charm - the kind the morning milkman or letter carrier or any man in the street has.  He was destined to be used by strong, self-seeking, unscrupulous men wanting power not for state, but for self.  The man may be honest, but he is stupid, which in his position of highest power is criminal.” 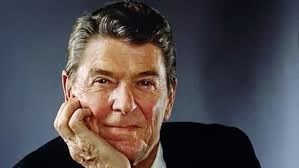 Lerman had more to say about Reagan’s “smiling, good-fellow self” which I will not repeat here. No, I will confine myself to Mr. Lerman’s more moderate criticisms, i.e., the ones in the passage above.

I’ve been thinking about Reagan these days because I’ve been reading Doris Kearns Goodwin’s latest book, Bully Pulpit: Theodore Roosevelt, William Howard Taft, and the Golden Age of Journalism.  Goodwin’s books have invariably been both enlightening and engaging to me and Bully Pulpit is no exception.  One of its main messages is the powerful effect that capable authors like Ida Tarbell and Lincoln Steffens had on public opinion in the early 1900s.  It’s hard to think who has such influence today.  I suppose Jon Stewart’s Daily Show comes close, but it’s kind of humiliating to realize that comedy shows today are where we have to go to find influential critical commentary about political and corporate shenanigans.  A hundred plus years ago, serious writers could generate a tidal wave of reform just by reporting what Standard Oil and its flunkeys in the Senate were up to.  How times have changed.  Sigh.

Equally fascinating is a second theme of Bully Pulpit: the way in which Theodore Roosevelt, working against the leadership of his own Republican Party, used government to make life better for Americans at the expense of the big corporations.  Before Roosevelt became president, corporate money thoroughly controlled the GOP and the GOP served those moneyed interests.  Roosevelt changed much of that by establishing regulations aimed at protecting citizens against their depredations.

Ronald Reagan, of course, did the opposite.  He initiated an era in which the government – long the protector of the people – came to be viewed as a hostile alien entity.  And by encouraging a belief in this bizarre notion, he enabled the corporations to once again exploit and abuse ordinary citizens in a way they had not done for decades.  That’s why middle class incomes have become stagnant while the one percent has basked in unprecedented wealth - since about 1980.

But I don’t believe that Reagan screwed middle class Americans on purpose.  I agree with Lerman that he was simply not very smart - and certainly not smart enough to be president.  He thought he was doing the right thing because he listened to the wrong people.

Reagan had been a Democrat in his youth, and for good reason.  His hometown was hit hard by the Depression, and his family, like many others, faced the prospect of poverty and homelessness.  Only government intervention - Franklin Roosevelt’s New Deal - saved the Reagan family and many of its neighbors from this fate.

But later in life, once he was married to Nancy, Ronald Reagan bought into the right-wing Republican philosophy of his wealthy father-in-law.  Even though his well-being as a youth had depended on government intervention, he decided, once he was wealthy, that “the government is the problem.”  His very shallowness served him well here, allowing him to ignore the bizarre contradiction of his about-face.  His biographer, Lou Cannon, said that Reagan was always uncomfortable around intellectuals.  No wonder.  By the same token, I imagine snake oil salesmen must be uncomfortable around real doctors.

One of the least appealing qualities of Reagan was his bigotry.  Granted, he was a sort of good-natured dude, and he didn’t come across as a snarling bigot in the style of, say, Jesse Helms.  But bigot he was.  Two of his most outrageous and disgusting gestures along these lines were his touting of “states’ rights” in his 1980 Philadelphia, Mississippi, speech and his portrayal of an irresponsible “welfare queen” living high on honest taxpayers’ money as though she were a fair depiction of poor black families during his campaign.  Yuk.

Despite his stupidity, Reagan was not without talent, and herein we find the sources of his political success.  He was competent enough in backslapping bonhomie, but his real skill lay in public relations.  The “superficial Irish charm” of which Lerman wrote came to the fore when he was on television and through that medium he reached millions of Americans, many of whom were no more knowledgeable about the world than he was.  When he said “Government is not the solution to our problem; government is the problem,” millions of people, many of whom depended heavily on government protection or support, believed him and they watched with approval as he dismantled many of the reforms that his predecessors had put in place.

Of course Reagan didn’t bring about anti-government hostility single-handedly and he isn’t solely responsible for the rapacious way in which corporations have once again come to exploit ordinary citizens.  But more than any single individual, he, with his shallow but clueless charm, made greed-is-good corporate ruthlessness possible.

His anti-government policies were not born in the thin soil of his own consciousness; they came from those “strong, self-seeking, unscrupulous men” in the background about whom Lerman wrote.  Reagan was merely their public face.  He was, in fact, not so much a president as a press secretary, a spokesman for those who stood to benefit from a pro-corporate, small government philosophy.  And that’s why I think it’s reasonable to consider him “great” in some sense.  He was, in my opinion, the greatest presidential press secretary of modern times.

Let me wrap up by recommending Goodwin’s Bully Pulpit.  The book is a veritable inspiration.  It shows how an awakened citizenry can actually make government an active force that protects the weak – that is, almost all of us - against the strong - those we have come to know as “the one percent.”  In short, it points the way out of the dreadful era into which Ronald Reagan’s ingratiating charm has led us. 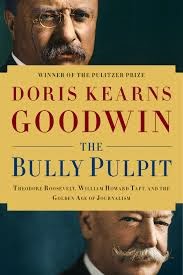