First of all, let me toast the five justices on the Supreme Court who ruled, in Obergefell v. Hodges, that states cannot make laws prohibiting people who love each other (or not) from getting married merely because those people are of the same sex.


But secondly, I feel obligated to point out that Chief Justice John Roberts is not the anthropologist he seems to think he is. I hasten to add that being a chief justice, instead of an anthropologist, is not a sin, though I would also suggest that the world would be a better place if more chief justices were, in fact, anthropologists.


But maybe that’s just me.


Anyway, here’s the problem: Justice Roberts wrote, in a dissenting opinion on the Obergefell v. Hodges case, that “the Court invalidates the marriage laws of more than half the States and orders the transformation of a social institution that has formed the basis of human society for millennia, for the Kalahari Bushmen and the Han Chinese, the Carthaginians and the Aztecs.”
Whoa – Justice Roberts, get ahold of yourself! These sweeping assertions about marriage across cultures and in human history are, in a word, balderdash. Here’s why: different societies around the world have had lots of different ways of thinking about marriage and about the place of gender identity in marriage.


Let’s consider the Han Chinese, one of the cases the Chief Justice so casually submits as evidence. Traditional Han Chinese marriage was a very different sort of thing from the one-man-one-woman arrangement implied in Justice Roberts’ dissent. First of all, and as is well known, an awful lot of Chinese marriages were polygamous in the past. Furthermore, there were numerous cases where, if a betrothed man happened to have died before his wedding day, the betrothed woman would wind up marrying not him, but his ghost. Though these marriages did have at least a vague sense of heterosexuality about them, I would suggest that Justice Roberts not call on the traditional Han Chinese as friends of the Court here unless he wants to invite a docketful of cases where forlorn individuals demand the right to marry the ghosts of their departed lovers. But maybe he would be OK with that, as long as the supplicant and the departed were of opposite sexes.


Concerning the good people of southern Africa’s Kalahari (and I would encourage Justice Roberts to refrain from using the pejorative term “Bushmen”), I have little to say except that their marriages were sometimes polygamous. On the other hand, the Nuer people of northern Africa are well known in anthropological writings for female-female marriages. These lady-to-lady marriages were generally undertaken when a lineage, lacking sons, sought descendants through the marriage of one of its daughters to another woman, a woman young enough to bear children. It was then up to the young bride to find hooking-up opportunities among the local lads so she could get herself with child and thus provide the family with descendants.


Finally, I’ll leave aside the Carthaginians and the Aztecs in favor of some well-known Native Americans of the old west where “two spirit people,” that is, people who combined male and female qualities, have been known and written about for many years. Will Roscoe has described these folks fairly recently in The Zuni Man-Woman and in Changing Ones: Third and Fourth Genders in Native North America. May I suggest to you, Chief Justice Roberts, that you put one or both of these on your summer reading list?


George Bird Grinnell also wrote about these male-female individuals decades ago in The Cheyenne Indians: Their History and Ways of Life. He noted that among the Cheyenne, some people who were regarded as male by virtue of their sex organs, got married to men, also penilly endowed, and thereby assumed the role of wife to these men.*


So now, Justice Roberts, do you have anything more to say about the kind of marriage that has “formed the basis of society for millennia?”

I didn’t think so.

I will give Justice Roberts this much, however: though he is anthropologically ignorant, at least he is not a mean-spirited bigot. He is not, in other words, Antonin Scalia, who wrote in his vitriolic dissenting opinion that the supporters of same-sex marriage are “enemies of the human race.”


I guess we will let history make the final judgment as to who in this issue is the real enemy of the human race. In the meantime, isn’t it wonderful when an institution that represents us all, like the White House, reflects a sentiment that symbolizes what is best in us? 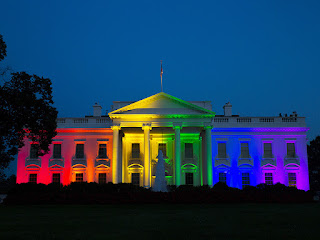 
Yesterday Donald Trump announced that he is running for president. As a public service, and as a way to express our deepest feelings about this development, Culture World has decided to write an open letter to Mr. Trump.

What an amazing day! You have astonished the world with your bold announcement. Of course, some people are saying things about you like, “That Trump is a bigger idiot than I realized,” and “Ha ha ha ha ha!” and “I wonder what his position is on the Currency and Foreign Transactions Reporting Act?”

OK, I haven’t actually heard anyone say that last thing, but my point is, you need to ignore these people. After all, most of them are not rich.

You, on the other hand, are, “really rich.” You have a total net worth of $8.73 billion, a point you made, not to brag, but just to let people know this important fact.

But Culture World knows you’re a sensitive guy, and therefore implores you not to let the critics get you down. People may say things like, “When did Donald Trump ever run for office?” or “Donald Trump sucks,” or “Donald Trump’s head looks like a glistening Easter egg covered in orange grass,” and so on. But don’t let this get to you, because…you’re Donald Trump! No other candidate can say that.

And there are ways to fight back. If, for example, while you’re standing at some podium, a sudden gust from the AC causes your comb over to fly up, you can just say, “This AC was probably designed by Obama!” or something like that.

As you said in your speech yesterday, America is not a great country these days, but with you in the White House, America would be great again, because you know how to handle the Chinese. The Chinese are now building a military island in the South China Sea, but, as you so wisely pointed out, America under Obama won’t build a military island because of environmental regulations. No wonder Obama is turning us into a Third World country, what with all his worrying about his stupid planet's environment.

And don’t let those Republicans block you from the debates. I know that some of them are saying, “Wait - we can’t let the clown car get even clownier.” But what do they know? They never showed their greatness by writing The Art of the Deal. Only you have proven yourself to be a great leader, a great businessman, and a great author. If they try to block you, here’s what you do: buy Puerto Rico and turn it into the fifty-first state! Then you could elect yourself to be a senator from Puerto Rico. Heck, with your money you could elect yourself to be both senators from Puerto Rico. The Republicans wouldn’t dare turn someone away who is two sitting senators! Game over.

Culture World has so much confidence in you that it would bet its entire budget on your victory. And you should do the same. You should offer to give your fortune away, the entire $8,737,540,000, to the Nature Conservancy if you are not elected president. What do you have to lose? Nothing! Because there is no chance you can lose -- because you are DONALD TRUMP! 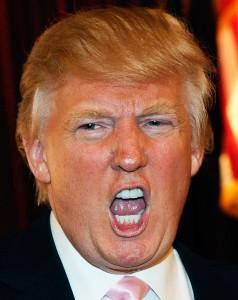