The Second Battle of Olustee

I didn’t know I was a Yankee until I was nine years old. This is because I was raised in the north. In New Jersey in 1he 1950s, the Civil War wasn’t on everyone’s mind. The situation was quite different in Florida.

My family moved to Cocoa Beach in 1956, and during recess on the first day of fourth grade there, I was excitedly asked by one of my classmates, “Are you a Yankee or a Rebel?”

“Where are you from?”

“Yer a Yankee! Git over there,” my classmate said, with a great deal of energy but with no apparent hostility, and he pointed to a pack of fourth grade boys that had formed up about 100 feet away.

So, I joined my fellow Yankees and we spent the next 30 minutes of recess re-enacting the Civil War as each group charged the other shouting with feigned ferocity. There seemed to be no real anger in this game, but it stoked up our spirits of tribal loyalty to blood-boiling intensity.

One year later, when our family had moved to Lakeland, the Civil War was once again re-enacted when my fifth grade teacher, Mrs. Tolle, required that every morning after the pledge of allegiance to the flag, we remain standing to sing “Dixie.” By then I had learned to identify enough with my Yankee tribe that I would always insert the word “Jersey” in place of “Dixie” as I sang. In any case, it didn’t seem quite honest for me to sing, “In Dixieland where I was born in…” since it was Lafayette, Indiana, that I had actually been "born in," which is hundreds of miles away from Dixie.

Mrs. Tolle also introduced me to Southern manners when I answered “Yes” to a question she had posed, and she, with hot indignation, demanded that I answer her with “Yes, ma’am.”

My Yankee upbringing had never specified that ma’am and sir distinguished courtesy from rudeness, but Mrs. Tolle made it clear that this was part of the new code I had to learn, lest I invite myself to a real down-home whuppin’.

Years later, when I moved to California to attend graduate school, my fellow students there identified me as a Southerner. I didn’t object to this, since they seemed to think being Southern made me interestingly exotic. Also, by then I had learned to love grits and red beans and rice, so I felt I was Southern enough to pass in the greater Los Angeles area.

I see from Lizette Alvarez's article in today’s New York Times that the Civil War is still not over in Florida. The issue is the famous Battle of Olustee (well, famous in North Florida), where a detachment of 6,000 bluecoats got shellacked by a slightly smaller contingent of rebs and had to skedaddle back to Jacksonville in February of 1864. 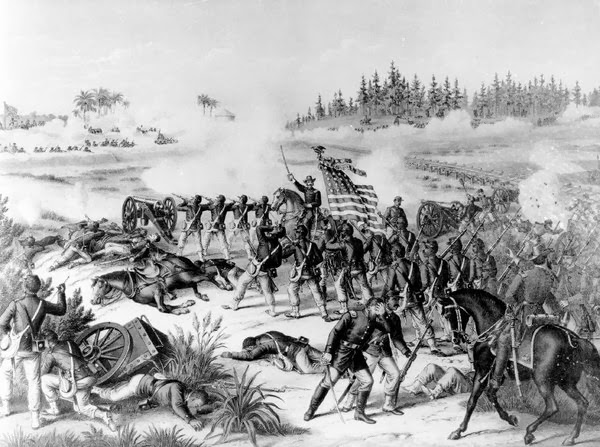 
What’s making Jefferson Davis tremble in his grave is the recent proposal by the Florida chapter of the Sons of Union Veterans of the Civil War to place an obelisk in the Olustee Battlefield Historic State Park. Currently three monuments commemorating the Confederate soldiers already stand there, but there's nary a one for the Yankees.

The Confederate response? No go.

According to the Times story, John W. Adams, a former division commander in Florida for the Sons of Confederate Veterans declared, “Old grudges die hard. And feelings run deep.”

Well, I reckon they surely do.

“…the request has enraged many in the Sons of Confederate Veterans, which views the state’s decision as a betrayal of the small park’s legacy. As word spread, an online call to arms was issued by the national Confederate group’s leader to oppose the ‘Darth Vader-esque obscene obsidian obelisk’ in what the group’s members see as the Second Battle of Olustee. Reinforcements were drafted, namely State Representative Dennis Baxley, the Republican chairman of the House Judiciary Committee and a member of the Sons of Confederate Veterans.”

I suppose that in the eyes of the Sons of the Confederacy, Darth Vader was a fairly typical Yankee.

The “Second Battle of Olustee” reminds me of the argument made by Joshua Greene in Moral Tribes, his study of the ways in which morality is often intimately linked to one’s sense of tribal loyalty. Greene’s book, by the way, is quite good, and I would recommend it to anyone interested in the psychological roots of human moral systems. He offers a barrelful of evidence from psychological studies that show how a wide range of human motivators are apparently rooted in our genetic make-up and responsible for our capacity to survive as cooperative group members. These include “empathy, familial love, anger, social disgust, friendship, minimal decency, gratitude, vengefulness, romantic love, honor, shame, guilt, loyalty, humility, awe, judgmentalism, gossip, self-consciousness, embarrassment, tribalism, and righteous indignation.”

Despite his scientific credentials and good intentions, I’m afraid Professor Greene would never win the approval of Mrs. Tolle nor the Sons of the Confederacy. His main argument, ultimately, is that the best thing we can do when tribes collide is to hold our loyalties in check and seek a neutral basis on which to build a pan-tribal moral framework. And as far as the Confederate Sons of Olustee are concerned, a pan-tribal framework would be a desecration of the sacred site. “After all,” they seem to be saying, “the Yankees took a hard lickin’ here some 150 years ago, and that’s the one thing folks need to remember when they visit this park.”

On a related topic, I have made the argument that my Great Great Grandfather Flynn may have actually won the Civil War. (Culture World, July 31, 2010)

Dmitri - Is That You?


To celebrate the first day of 2014, Mark Bittman of the New York Times wrote about previous years ending in 4, going all the way back to 1944. Following Mr. Bittman’s example, I propose that we go back even deeper into history to the year 1604. Why 1604? Well obviously because that was the year that False Dmitri (or, should I say, “a False Dmitri”) invaded Russia from Poland.

False Dmitri based his invasion on the claim that he was the real “Dmitri,” namely the long-lost son of the recently deceased Russian Tsar, Ivan IV, commonly known as "Ivan the Terrible". Clearly, he was not. Nevertheless, he was validated as a true and beloved son by his “mother,” the widow of the late Ivan the Terrible. (I suspect that Mrs. Terrible was motivated by a surge of “What's in this for me?” thinking at this crucial moment in her life.)

In any case, False Dmitri quickly assembled an armed force, comprising mainly Poles and other western types, made for Moscow, and, after a struggle, managed to seize the throne. Once installed as Tsar, he did something every Russian of his day considered a heinous and unforgivable sin: he married a Catholic. His bride and Tsarina, Marina Mniszech (aka “Marinka the Witch”), declined to convert to the Russian Orthodox Church. That’s when things started to get weird.

A nobleman named Vasily Shuisky accused False Dmitri of promoting Catholicism, Protestantism and, just for good measure, sodomy, in the Russian court. There was also a widely believed story that Dmitri planned to use his foreign minions to slaughter thousands of good Orthodox Russians. Armed with paranoid-induced passion, Shuisky managed to gather a mass of followers who stormed the Kremlin.

In a desperate effort to escape, False Dmitri leapt from a window, but broke his leg in the fall. He was quickly caught by Shuisky’s followers and executed. But death was not adequate punishment for someone who dared to not really be Dmitri. Consequently, his body was first publicly displayed, then cremated and, following this, his ashes were stuffed into a cannon and shot westward in the direction of (the hated, Catholic) Poland. 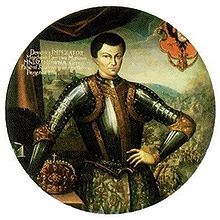 False Dmitri I - In a Cocky, Self-assured Moment

I wouldn’t want to give the impression that I am a particular fan of False Dmitri, or that I condone the impersonating of deceased heirs to thrones as a commendable life plan.  However, I feel compelled to give False Dmitri credit for one thing at least - originality. Here’s why.

Our False Dmitri (commonly known today as False Dmitri I) was followed in 1607 by False Dmitri II and a few years later by False Dmitri III. Each of these copycats showed up and claimed to be Ivan the Terrible’s long-lost son and each insisted he had NOT been blasted to Poland. On top of this, each one was presented to Marinka the Witch who authenticated each in turn as “the true Dmitri.” More on that later.

False Dmitri II, though a copycat, does deserve a little credit for not leaping immediately onto the False Dmitri bandwagon. He did not, after all, begin his public life by mendaciously claiming to be the late Tsar’s son. No, he started by mendaciously claiming to be Boyar Nagoy, a prominent Muscovite nobleman. It was only under torture that he “confessed” that this was a lie, and that he was actually the long-lost Tsarevich Dmitri, son of the late Ivan the Terrible.

Released by his torturers, False Dmitri II quickly assembled an army of Polish and Cossack troops (which apparently was easily done in those days), and marched on Moscow. His campaign ultimately failed and so he resigned himself to being the Tsar of some provincial territories out in the Russian boondocks. After a few years of being a mini-Tsar, and in the midst of a drunken binge, he was assassinated by Peter Urusov, a nobleman whom Dmitri had once had flogged. Urusov reportedly chopped off Dmitri’s head and hand after killing him, thus maintaining the “death is not enough” tradition initiated by the executors of the original False Dmitri. 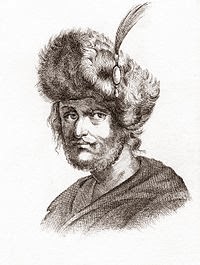 False Dmitri II - It's No Wonder His Widow Was Fooled

No, we’re not done yet. There followed, in 1611, the sudden appearance of False Dmitri III who gained the backing of yet another army of Cossacks. The Cossacks of those days were apparently not too particular about their Dmitris as long as they were validated as authentic and true by the ever-amenable widow Marinka (the witch). “Yes,” proclaimed Marinka, “this one is definitely my Dmitri.”

False Dmitri III did somewhat better than F.D. I and F.D. II in that he was merely killed and was not fired from a cannon nor was his body publicly mutilated. In May 1612, he was quietly "disappeared" in a manner that today would probably have impressed even Jimmy Hoffa’s handlers.

How many more Dmitris would Marinka have willingly validated in her effort to maintain her tenuous claim on the Russian throne we know not, for with the demise of False Dmitri III, Russia ran out of Tsarevich Dmitris. So ends a period of Russian history of which I can honestly say, I would rather read about than live through.

In conclusion, I'd like to take a moment to thank my colleague Professor Alex Boguslawski who first introduced me to the false Dmitris during his spring 2013 seminar on Russian history. Any errors or false notes in this essay must be attributed to me and not to my true and learned friend, Alex. And thanks to Wikipedia for the Dmitri pictures.
Posted by Rlmoore2647@gmail.com at 6:23 AM No comments: