When it comes to ranking presidents, three particular bunglers - James Buchanan, Andrew Johnson, and Warren Harding – have, for as long as I can remember, been designated the worst men ever to have occupied the White House. Of course, now it’s time for those fellas to move over to make room for a loser whose iniquity makes them seem no worse than “slightly below average.”


Donald J. Trump, now well and truly impeached, will certainly occupy the very bottom of the presidential barrel for decades to come (See current presidential rankings here). His unique blend of incompetence and gross immorality is unlikely to be surpassed in my lifetime or, let’s hope, in the lifetimes of the next few generations.


Most observers have been categorizing Trump, along with Andrew Johnson and Bill Clinton, as one of three presidents to have been impeached. But I’m inclined to set him apart with a different group, a gang of political figures so thoroughly sleazy that they stand apart and unparalleled in American history. The members of this coterie are steeped in moral depravity to such an extent that, were you to be introduced to one of them, you might hesitate to shake his hand for fear of being contaminated with whatever vile and noxious substance made them who they are. I’m talking about Joe McCarthy, Richard Nixon, and Roy Cohn.


Senator Joe McCarthy (1908-1957) is famous for stirring up his base with outrageous lies about outsiders who, he claimed, were undermining America. His capacity to get people to believe things that are palpably false is eerily akin to a similar knack shared by the current Oval Office occupant.


Of course, McCarthy was brought down in a dramatic showdown with the Army (or what Trump would no doubt call the “Deep State”) and his political fortunes quickly faded - though his name lives on as a synonym for baseless fearmongering.

There’s a Spanish saying that goes something like this: “Dime con quién andas, y te diré quién eres.” It means, roughly, “Tell me who your friends are, and I’ll tell you who you are.” If you believe in this sentiment (as I do), you will not be surprised to know that Joe McCarthy and Richard Nixon were allies in the early 1950s. But Nixon is best remembered for his own political collapse in 1974 brought about by the Watergate scandal. (For a quick review of Watergate, see Dickgate.) Nixon is also well known for his post-presidential claim that, “If the president does it, it's not illegal.”


Senator McCarthy’s right-hand man was a notoriously corrupt and aggressive attorney named Roy Cohn. Attorney Cohn’s approach to life was guided by three rules: 1. Do whatever you can get away with to get what you want, 2. Viciously attack anyone who tries to stop you, and 3. Never apologize for anything. Sound familiar? It should, because Roy Cohn was a friend and influential mentor to a young Donald Trump. 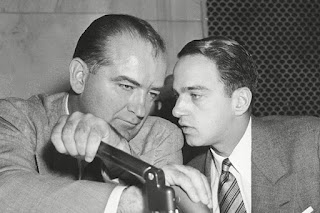 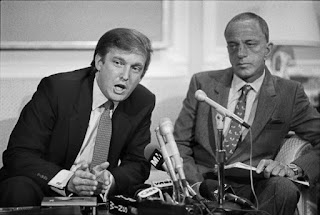 This genealogy of immorality – McCarthy, Nixon, Cohn, Trump – seems like it could have been compiled by Ancestry.com.

But wait, there’s more. Among the astonishing array of Trump associates who have been tossed into the slammer over the past two years, is one Roger Stone, a dirty trickster famous for his belligerent, never-apologize manner. But he is even more famous for the Richard Nixon tattoo that adorns his back. 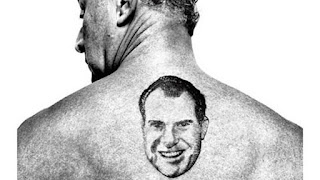 Roger Stone and His Tattoo

All I’m saying is this: when we think of Donald Trump, we shouldn’t think of him as noteworthy for being impeached; we should really remember him most for belonging to this uniquely squalid fraternity of politicians, what we might well call the McCarthy-Nixon-Cohn Brotherhood. Or, as my friend, Profesora Tomé, might say, “Dime con quién andas, y te diré quién eres.”

Republicans on Right vs. Wrong

Watching GOP lawmakers during the impeachment hearings has led me to wonder how they decide what is acceptable behavior for an American president. To resolve this question, I invited key GOP members of the House along with Senator Marco Rubio to the Sandspur Café, my local watering hole. I was pleased to see not only Senator Rubio, but Congressmen Will Hurd, Jim Jordan, and Devin Nunes trickle into the café and seat themselves at my table. Once we were all comfortably seated and provided with libations, I plunged immediately into the questions at hand.

Me: Okay, so President Trump held back vital military aid from the Ukrainians, while the Russians attacked them, and then demanded a quid pro quo: Ukraine’s President Zelensky had to announce an investigation into Hunter Biden’s activities and also had to look into Ukrainian interference in the 2016 election. Now, do you all agree that he was wrong to do this?

Marco Rubio: Of course not.

Jim Jordan slams his fist on the table and spits aggressively on the café floor.

Me: I’ll take that as a “No.” What do you think Congressman Hurd?

Will Hurd: Well, what President Trump did was wrong, but it doesn’t warrant impeachment.

Jordan: Okay, wait a minute. We’re going to have to caucus out back for a minute. Let’s go, Hurd.

They walk out the backdoor of the café and, after a few minutes during which loud thuds and the crashing of trash barrels can be heard, Jordan, Nunes, and Rubio re-enter and sit down.

Jordan (blowing softly on his chafed knuckles): It’s unanimous. We all agree the president did nothing wrong.

Me: What about Congressman Hurd?

Nunes: Why do you witch-hunting media types keep trying to make President Trump look bad? In the meantime, you just let the Ukrainians get away with interfering in our elections.

Me: But the Ukrainians never interfered in our elections. The Russians did.

Me: Says Robert Mueller, the CIA, and all the other U.S. intelligence agencies.

Nunes: What do they know? Putin says Ukraine interfered in our election and he is very strong when he says it.

Me: But…Okay, never mind. I’d just like to know what you think about Trump’s actions. He withheld military equipment from our Ukrainian allies in order to promote his own personal interests. What does this say about the future? You may set a precedent here that allows other presidents to turn U.S. policy into private instruments of personal power, you know, like Idi Amin did in Uganda, or Ferdinand Marcos in the Philippines. Aren’t you at all worried about what future presidents may try to get away with?

Jordan: Well, the good ones are held to a different standard. They should be able to do whatever the hell they want.

Me: Which ones are the good ones?

Jordan: The white guys who give big tax breaks to millionaires.

Rubio (looking dreamily off into space): And, also the Cuban ones…

Me: But think about Lend Lease during World War II. Britain desperately needed ships to save it from Nazi submarine attacks. Would it have been okay for Franklin Roosevelt to say to Winston Churchill, “You can have the ships only after you slander one of my political opponents”?

Nunes: I don’t know. Was Franklin Roosevelt a Republican?

Jordan: Enough of your media-type “gotcha” questions. President Trump can do what he wants to the Ukrainians because he’s a stable genius and he is making America great again! 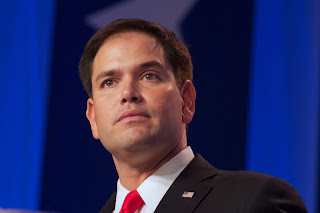 And so ended my search for the Republicans' sense of right and wrong.
Posted by Rlmoore2647@gmail.com at 7:55 AM 3 comments: