Wouldn’t it be cool if our president weren’t an idiot? Of course, even if he weren’t intellectually challenged, he would still be a pathologically dishonest narcissist, so there’s that.

What started me thinking about this was a comment by my keen-eyed spouse when she pointed out the similarity between Trump’s language and that of Holden Caulfield, adolescent protagonist of The Catcher in the Rye. Her comment was provoked by a New Year's Eve tweet from the Doofus in Chief.

More on that tweet later, but right now I’d like to make a point about Trump and Iran that seems to have escaped his notice: He is neither admired nor respected by most of the people of Iran. His anti-Muslim bigotry is well known, and his UN speech last September was widely scorned by the Iranian people as insulting to them.

Besides this is the obvious contrast between the clownishly belligerent Trump and the intelligent and open-minded Obama. One thing I learned on my 2015 trip to Iran is that Obama is widely liked and admired there. Since Trump took over, the Iranians don’t feel they have a friend in the White House, and they certainly don’t see in Trump a leader who respects them.

It is true that the Iranian government is authoritarian and it is particularly unpopular among Iranian liberals, but right now President Donald Trump is equally unpopular. His “words of encouragement” are not helpful to freedom-loving Iranians.

And now, back to those words: here is what Trump tweeted on New Year’s Day:

“Iran is failing at every level despite the terrible deal made with them by the Obama Administration. The great Iranian people have been repressed for many years. They are hungry for food & for freedom. Along with human rights, the wealth of Iran is being looted. TIME FOR CHANGE!”


The simplicity of the language and the utter ignorance it expresses are what call to mind Holden Caulfield's pathetic “Egyptian” essay. Here, as a sample, is a passage from The Catcher in the Rye about the conversation poor Holden has with “Old Spencer,” his disappointed history teacher:

“We studied the Egyptians from November 4th to December 2nd,” [Old Spencer] said. “You chose to write about them for the optional essay question. Would you care to hear what you had to say?”

He read it anyway, though. You can't stop a teacher when they want to do something. They just do it.

‘The Egyptians were an ancient race of Caucasians residing in one of the northern sections of Africa. The latter as we all know is the largest continent in the Eastern Hemisphere.’

I had to sit there and listen to that crap. It certainly was a dirty trick.

‘The Egyptians are extremely interesting to us today for various reasons. Modern science would still like to know what the secret ingredients were that the Egyptians used when they wrapped up dead people so that their faces would not rot for innumerable centuries. This interesting riddle is still quite a challenge to modern science in the twentieth century.’

He stopped reading and put my paper down. I was beginning to sort of hate him.

“Your essay, shall we say, ends there,” he said in this very sarcastic voice.


If Holden were a real person I would feel obligated to apologize to him for having compared him to Donald Trump. After all, Holden is at heart a decent guy. But still, Trump’s level of thought about the Iranians, and his clumsy and misguided way of talking about them are uncannily similar to Holden’s take on the Egyptians.

I should add here that I have a special place in my heart for the people of Iran, since I was the Iranian students’ club adviser in a university where I once taught out west. Also, on my 2015 trip to that country, with my buddy, Professor Li Wei, I learned that there was (at that time) a great deal of good will toward the United States among most Iranians. We have a lot to offer each other, we Americans and our soul sisters and brothers in Iran, if only we didn’t have a crude, anti-Muslim blowhard occupying the White House and standing between us. 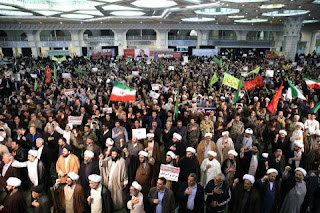 Iranian Protestors Taking It To The Streets
(From the Washington Post)