Godwin’s Law says that as an online discussion grows longer, the probability of a comparison involving Nazism or Hitler approaches certainty. So let me cut to the chase here and refer directly to Leni Riefenstahl’s Nazi propaganda film, Triumph of the Will. This extraordinary film concluded with an impassioned crowd screaming, “Make Germany great again!” and (with reference to Hitler’s main political foe) “Lock her up!”

OK, I lied about those last two things.

However, the Republican convention crowd did give me the creeps. I mean, why were those mad screamers shaking the heavens with cries of “Lock her up!”? Don't they care that the FBI investigation into Hillary Clinton’s email usage found no basis for indictment, much less conviction? Have Donald Trump’s followers given up entirely on the rule of law? Of democracy itself?

Well, yes. And this to me is the most disturbing aspect of Trump’s rise. Not only does he have a weird tendency to praise demagogues and dictators like Vladimir Putin and Kim Jong-un, but he also seems to relish mindlessly hostile and violent mobs.

Lots of observers have talked about the emotional appeal of what we might call Trumpism. A big part of it is racism and the feeling on the part of all too many white people that Trump has given them permission to let their bigot flags fly. But in addition to this there is the economic distress of people with dwindling resources. These folks harbor a feeling that “the government” isn’t responding or even paying attention to them. The resentment born of this idea leads a lot of voters to want to send Trump to Washington even if he makes a shambles of everything. They seem to be thinking that at least he will kick some ass while he’s there.

And they may be right, though I am much more worried about the shambles he would create than the ass kicking he might indulge in.

But back to the RNC mob: the single most unsettling thing about Trump’s rise is that it reveals just how vulnerable many Americans are to the appeal of “the Great Leader.” Like almost everyone, I have been amazed at how successful Trump is at whipping up a following, and I continue to be amazed (and troubled) at how it reveals that a lot of Americans don’t care as much about democratic institutions as they do about kicking ass.

But we may, at last, be seeing the beginning of a turning point, if not an actual repudiation of mob madness. Trump has stumbled by stepping on some sensitive patriotic toes with his blustering swagger. Today he is being lambasted for criticizing Khizr and Ghazala Khan, the Muslim parents of a fallen American Army Captain. Of course, Speaker of the House Paul Ryan and Senate Majority Leader Mitch McConnell have as yet declined to criticize Trump by name, but at least Senator John McCain has stepped forward to defend the honor of the Republican Party (and by implication, the entire country) with these words:

“In recent days, Donald Trump disparaged a fallen soldier’s parents. He has suggested that the likes of their son should not be allowed in the United States — to say nothing of entering its service. I cannot emphasize enough how deeply I disagree with Mr. Trump’s statement. I hope Americans understand that the remarks do not represent the views of our Republican Party, its officers, or candidates.”

Thank you, Senator McCain. But as for Ryan and McConnell, I guess they have drunk too much of the Trump-Aid. They continue to run with the mob. 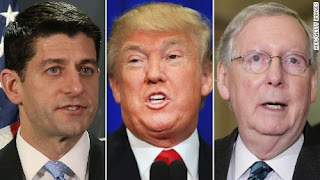